skip to main | skip to sidebar

Stephen King is a busy man: hot off the heels of 11/22/63, the Kennedy Assassination time-travel epic that became his biggest hit in decades, the Constant Writer revisits the world of Roland Deschain, the last Gunglinger.
THE WIND THROUGH THE KEYHOLE revisits our ka-tet on the Path of the Beam and is set between the events of WIZARD AND GLASS and WOLVES OF THE CALLA. A tale within a tale within a tale, WIND will likely offer little new insight into the nature of the Tower, but will be a treat for long-time readers who miss Roland, Jake, Eddie, Susannah, and Oy--arguably King's most compelling cast of characters.
THE WIND THROUGH THE KEYHOLE lands April 24 in every format under the sun, including good, old-fashioned print. For now, here's a ten minute audio excerpt.

King has long joked about bringing Danny Torrance back one day, saying that he always imagined Danny eventually running into Charlie from FIRESTARTER. They'd go on an adventure, fall in love, and have two or three horrifically dangerous children...
DOCTOR SLEEP, the sequel to THE SHINING, will be released some time next year, but don't expect any tongue-in-cheek FIRESTARTER crossover: DOCTOR SLEEP promises to be, in King's own words, "balls-to-the-wall, keep-the-lights-on horror."
I'm sorry that Stankey Kubrick isn't around to direct the fanbase-infuriating-yet-ultimately-brilliant film adaptation. And with luck, Mick Garris and King himself will steer clear of the inevitable movie version. The last time those two went near the Overlook... not too pretty.
The ink is still wet on this one:
In a Sunday Times interview conducted by Neil Gaiman, King mentioned his newest project, an amusement-park serial-killer novel titled JOYLAND.
No word if it takes place in the actual Joyland, an abandoned amusement park in Wichita, Kansas:
No word on pretty much anything else, though I suspect it won't be long before King is dropping hints. Meantime, we're left to wonder: is JOYLAND the Richard Bachman (and Richard Stark-like) crime novel King teased on the 11/22/63 tour, or is it an entirely separate work?
Posted by RJ Sevin at 1:10 AM 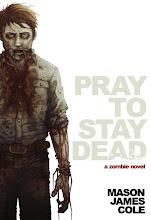 The first novel from Print Is Dead, a new zombie imprint from Creeping Hemlock Press

The Latest From Max Brooks

Bits of the Dead

Contributors of the Dead